Jesus is my Savior. He’s my friend. He’s my lover. He’s the reason I wake up every day.

Have you ever dreamed? I mean really dream? Sure, all have dreamed… but I’m not talking about just a dream.  I’m talking about a mammoth, monumental, magnificent only by a miracle dream; a dream requiring fearless faith.

Her dream began on March 1994 in Southern Maryland; the month, year and place Taryn was born.

Living as a young child in Maryland her dream shifted to Ceredo-Kenova, West Virginia at the age of five. She seemed destined to be a Wonder and later a member of the Timberwolves. These are the years that defined Taryn’s dream and her fearless faith.

Taryn had what you would call a normal childhood. Friends, school, cheerleading, birthday parties and sleepovers were a part of her life.

However, as Taryn entered Middle School she knew something was not quite right.

“In middle school, I went through a time of trying to find my worth in a lot of different things… In how pretty I could dress up at school or how much attention I could get from a boy…,” Taryn said. “It’s kind of hard to explain, but every time I messed up, I would pass a cross on the side of the road or overhear a conversation about Jesus and those things really stuck out to me. I knew that there was something better than the life I was living.”

All of us have had day, time and place events; meaning an event in your life when you will never forget the day or the time or the place it happened. I call these moments “DTP Events”.

Then the moment of all moments! The DTP! It happened for Taryn.

“I was 12 years old and writing my very first song in my bedroom. I remember after I finished just crying so intensely, overwhelmed with the presence of God,” Taryn said. “I could feel God calling me… Part of why I remember the feeling of writing my first song so well was because the first song I wrote was called “You’re the Only Way”. It was about how following Jesus is the only way and there is no escaping it.” 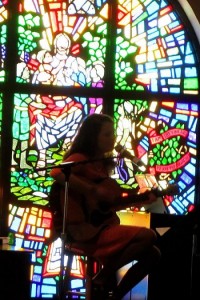 She goes on to say, “I knew that I would never find true happiness without Him, so on that day; I gave my whole heart away. I can’t pinpoint anyone sitting me down to explain how it all was supposed to work; it was just something inside of me. And I believe when I did that, He revealed my gift to me. That’s why I was so certain at such an early age on what I wanted to do. It was the best day and I still have many days like that now.” 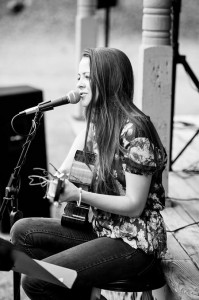 By her faith in God, Taryn is moving forward with her musical career. Living in Nashville, TN; she is currently working on a project which promotes her debut EP record self-titled “Taryn”. She is scratching and clawing her way to the top hoping to raise $2000. The money goes towards the making of a video for the single “Just To Be”.

This is from her website – My vision for this project is to bring “Just to Be” from my EP to life by making a music video and letting you peek inside my thoughts every time I sing this tune. It is a privilege to live everyday working towards what I love to do, but I need your help. If you have leftovers after rent, feed the hungry. But if there’s still an extra few Washington’s laying around, and if you believe that my music can bring joy to people’s lives, please give to this project. Love you guys. –

If you would like to donate to her project go to https://www.kickstarter.com/projects/1065282424/just-to-be-in-a-music-video

Taryn is running by faith! Everyone runs even singers, writers and musicians. I asked how her faith in Jesus changed the way she lived… and how important her faith is.

In true Taryn fashion she replied, “Well, I wake up every day and go straight to Him in prayer. It gives me a good outlook on the day and when something goes wrong, I talk to God. When something amazing happens (which happens a lot), I talk to God. (Or more like shout and sing to Him, haha) My relationship with Jesus and The Father is everything to me. Without God, everything is meaningless.”

Now, how are you dreaming? Maybe you should try Taryn’s approach. Dream with FAITH.

I turned 20 in March of this year.

My birth Father’s name is Tyron Thomas who still lives in Southern Maryland. My Mother’s name is Dawn Ball and her husband, my Step-Dad’s name is Chris Ball who are still living in West Virginia.

I have always looked up to Taylor Swift. At the time, she was the only girl I saw that was writing, singing, and playing all of her songs. I have never tried to be her, but she definitely had the right idea. Also, a cousin of mine had a guitar, and after picking it up one day I thought, “I’m gonna learn how to play this” as I plucked every string out of tune. Then I took a couple lessons from my cousin and later went on to the Music Box down the street to take some lessons from Paul and Charlie.

Sometimes I bake. I wouldn’t say it’s a passion of mine, but it’s my mother’s passion, and I often try to follow in her footsteps though she’s the better baker and decorator, and I’m the better taste tester. I do enjoy reading a good book when I can find the time and hanging with friends, drinking hot tea and back porch sitting, enjoying good weather and worship, and then it circles back to music.

My producer, Kent Wells, who is most well known for producing many of Dolly Parton’s albums, claims me under his label, Go Time Records, and they help me out in so many ways, but there are no written agreements or contracts. So, technically no, I am not. 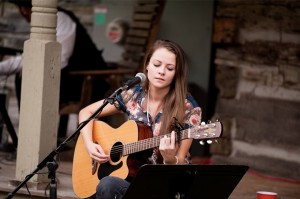 My biggest dream is to fill stadiums and arenas with people by my music, and let God do the rest.

This is probably the toughest question because there are too many to count. Just a few to mention are my Youth Ministry leader, Kati Bailey who showed me the love of Jesus in so many ways to the value of clean water to taking groups of us crazy kids to Africa and many more places and back. Another big influence in my life was teacher, Brian Davis. He always cared so much about his students, and I learned that History was not the only thing important to learn in History class. My best friend, Allie is a big part of my life. She brings so much joy to me and anyone that knows her and was a major blessing from God when I felt so alone. I really needed a friend. Also, my step-father; Chris Ball has played a huge role in my life. We have been through some tough times (mainly him putting up with me), but he has shown me a lot of love, and I never thank him enough for it.

The God who was, who is, and is to come.. He sent his son. He stepped down to Earth from his Heavenly throne!!!! He showed me how to live and endured so much for me to the point of death to stand in my place and clothed me in His righteousness and made ME righteous. Jesus is my Savior. He’s my friend. He’s my lover. He’s the reason I wake up every day. Wow, we have such a good God!!

This verse just makes me feel happy and warm and right at home.  “Lord, I love the house where you live, the place where your glory dwells.” (Psalms 26:8)

Also, this verse makes me smile too. It’s often one that God makes appear in random places to give me peace in certain decision making scenarios. “The Lord bless you and keep you; the Lord make his face shine upon you and be gracious to you; the Lord turn his face toward you and give you peace.” (Numbers 6:24-26)

I can always choose to write honest songs that real people can relate to whether it be uplifting or about a heart break. I think everyone desires to be understood so that they won’t feel alone. That makes sense because God made us to live in community with people. Right now, that’s what God is calling me to… Just to be an honest and loving person that can connect with people by using my music. Where that will lead to, we will have to see.

I can’t say that I don’t consider myself a role model because everyone is to somebody. With me, I have three younger siblings that look up to their big sis a whole lot. I’m really happy that they do, and I hope to always be someone for them to count on. I hope I can show all of them who Jesus is and that they can just grow up knowing that the Lord is good. I hope that other kids and teenagers and who knows, maybe even a few adults one day can see me as a role model, but only as a mirror reflection of Christ.

My mother is hands down my biggest influence, my role model, and my best friend. She has the biggest heart for people, and I hope that one day I can be half the woman that she is. 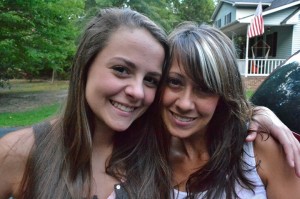