The Tree Of Life For You

A lot has been posted this weekend on our social media pages. One in particular jumps out at me. The phrase “if this offends you then unfriend me”.  I cringe every time it’s read… so sad.

We need more friends today than we have ever needed in the history of the United States of America.

Sure, we have different opinions but let us not forget we are cut from the same mold. It’s true. All of us share the same lineage and bloodline.

Moreover all of us were born into sin with the Hope that Jesus Christ would cleanse us. We must love and believe in Him and turn away from our sin. That’s the only requirement.

Jesus said in Matthew 11:6 “And blessed is the one who is not offended by me.”

These are gigantic words to live up to. Of course Jesus always had and always will have a way with words. He is the word.

“The Word became flesh and made his dwelling among us. We have seen his glory, the glory of the one and only Son, who came from the Father, full of grace and truth” (John 1:14)

So, I ask that you do not unfriend me. I need you and I hope that you need me. We need each other more than ever! All people!

Much has happened this year and more specifically the past several weeks.

Not to mention the state of Israel, ISIS, the Middle East and the war on terror.

ISIS is beheading and raping men, women and children. Christians and people of faith are being persecuted and murdered; all under the name of Radical Islam.

Israel, the tiny speck on the map, is in a fight for her life; the very place where Jesus will return.

Additionally there is the Tetrad (4 blood moons) and the year of Shemitah (every 7 years debts are forgiven – God can increase or He can decrease His blessings. It may also be a time of judgment)

Right now we are in the middle of a Shemitah year and a Tetrad cycle. 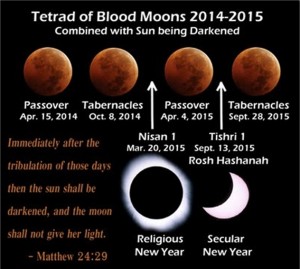 There are a lot of things going on… a lot of crazy things!

This is what the Bible says –

Doesn’t this sound familiar? Earthquakes, plagues, terror, lovers of self without self-control, brother against brother, nation against nation, blood moons, solar and lunar eclipse and the year of Shemitah…

It’s like everything predicted is coming to pass right now before our very eyes!

When the Jews settled in the Holy Land, they began to count and observe seven-year cycles. Every cycle would culminate in a Sabbatical year, known as Shemitah.

The last two Shemitah years of 2001 and 2008 saw the Twin Towers fall and the largest crash ever of the U.S. Stock Market.

During years of the Tetrad (4 Blood Moons) coinciding with the Jewish Feasts (Passover-Easter and Feast of Tabernacles) certain events have happened: 1-Jews expelled from Spain; 2- Israel became a nation; 3-Israel captures Jerusalem.

Combine this Shemitah year (2014/2015) along with the Tetrad (4 blood moons) falling on the Jewish Feasts (Passover/Easter/Feast of Tabernacles) and we have something that has never happened in over 2000 years since the time of Jesus. Never before! This is the first time. 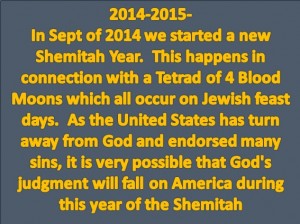 Many Bible scholars are predicting life changing events for this year. Whether there are or not, all signs are pointing to the soon return of Christ!

But Jesus did warn us “Now when these things begin to take place, straighten up and raise your heads, because your redemption is drawing near.” (Luke 21:28)

It is my desire that all of my family, friends and acquaintances receive Jesus in their life while turning away from sin and turning towards Christ our Savior. We must have a contrite heart.

The time is now. Soon God will send His Son Jesus back to earth; the next big television event, higher ratings than the Super Bowl, more coverage than the Presidential election! The second coming of Christ is near! Are you ready?

Blow a trumpet in Zion; sound an alarm on my holy mountain! Let all the inhabitants of the land tremble, for the day of the LORD is coming; it is near (Joel 2:1)

He who has an ear, let him hear what the Spirit says to the churches. To the one who conquers I will grant to eat of the tree of life, which is in the paradise of God. (Revelation 2:7)

“For You formed my inmost being; You knit me together in my mother’s womb. I will praise You, for I am fearfully and wonderfully made...