Now that the election is behind us, we can say goodbye to the nomenclature, backstabbing advertising. It was seemingly one ad after another; featuring egos bashing their opponents. Can’t we all get along? 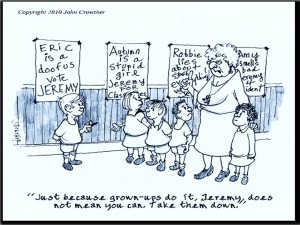 For some of us that may be a lot to ask.

You see there is a little word that swells up inside of us… It tries to make itself big. You may know the word I’m talking about it. All of the letters in this word are capitalized because this word wouldn’t have it any other way.

The word is PRIDE!

I like what Paul said in Ephesians 3:7-8 “I became a servant of this gospel by the gift of God’s grace given me through the working of his power. Although I am less than the least of all the Lord’s people, this grace was given me: to preach to the Gentiles the boundless riches of Christ,”

Paul didn’t say he was the least. Instead, he said less than the least. In other words, he was last. Very last!

We are trained at an early age to be first and not last. PRIDE is often the motivating factor. 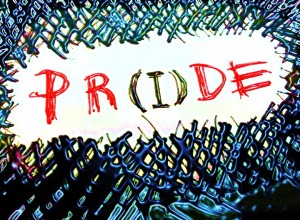 Is it OK to have PRIDE? Is it OK to be proud? How about PRIDE in country or family?

The Bible mentions PRIDE or proud nearly 100 times; never as a positive manner or good characteristic. Actually the Bible declares PRIDE is a sin. PRIDE thinks it is best, first and right all of the time. Sound familiar? …Hopefully not.

The first sin ever committed was PRIDE. Lucifer committed it. Afterwards, he was known as Satan. He thought he was better than God. He wanted to be first and he thought he was always right. PRIDE was Satan’s ticket to Hell. God gave him the boot and Satan took a big fall! Proverbs 16:18

In Isaiah 14:13-15 Satan was thumping his chest proclaiming his greatness. How wrong he was!

And if one person could’ve ever had PRIDE it would have been Jesus. Right?… He is the King of the universe and the Son of God. He could have thumped his chest and no one could have done anything about it. But he chose to be humble.

Jesus taught that less least last wins in the long run. He was the perfect example of humility.

The Bible clearly favors humility over PRIDE so…

Christians should lay their PRIDE down; Ask for help; You don’t have to be right (all of the time); Say I’m sorry; Don’t seek self-recognition; Count others more significant than yourself, show interest in others and humble yourself. (Philippians 2:3-11) (1 Peter 5:6) …

And finally know that everything good comes from God. His grace allows you to be successful! (James 1:17)

Apply these three words in your Christian run and become more humble, like Jesus.

The humble humility of Jesus: